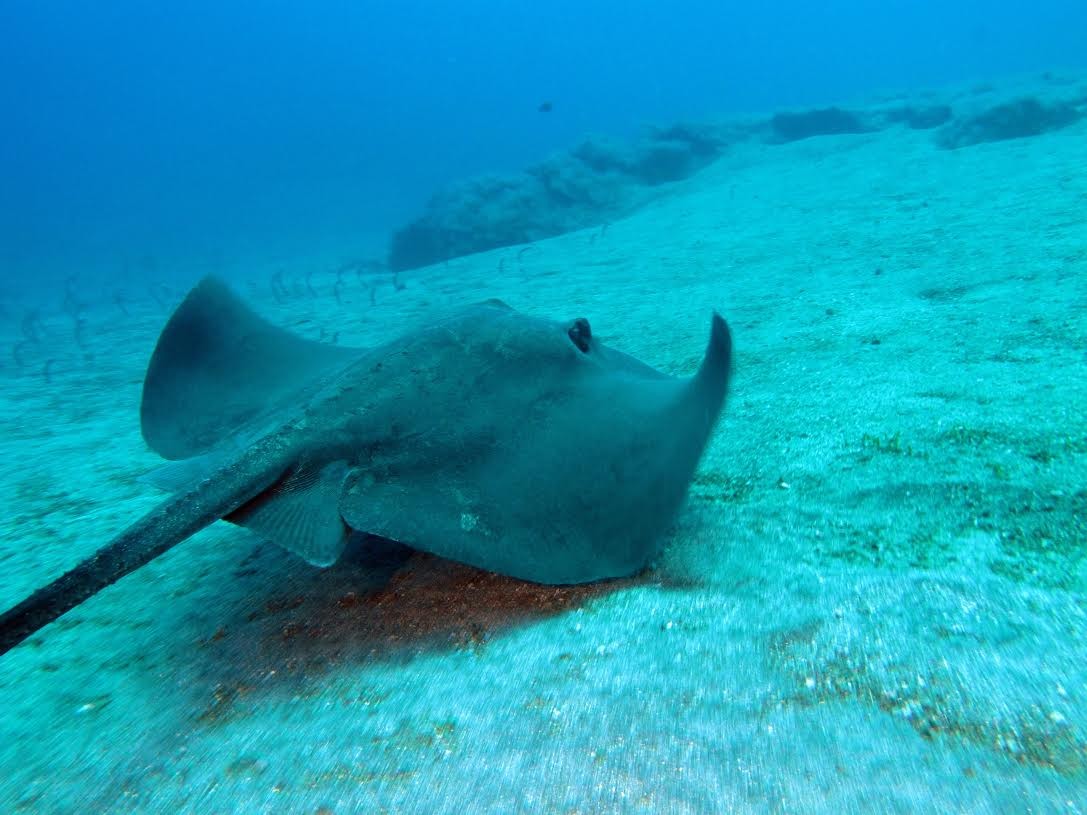 The life of a stingray

The round fantail stingray or round stingray inhabits sandy, muddy, or rocky coastal habitats in the eastern Atlantic Ocean and the southern Mediterranean Sea. This dark-coloured ray typically reaches a width of 1 m (3.3 ft), and can be identified by its nearly circular pectoral fin disk, short tail, and mostly bare skin. The round fantail stingray hunts for fishes and crustaceans on the sea floor.

The round fantail stingray is found in the tropical to subtropical waters of the eastern Atlantic from Mauritania to Angola, as well as off the Canary Islands, Madeira, and Cape Verde. This species has also recently colonised the southern Mediterranean Sea, where it is now occasionally sighted from Tunisia to Egypt, with isolated records from off Turkey and Tuscany, Italy.

The round fantail stingray has a nearly circular pectoral fin disk slightly wider than long. The tail measures no longer than the disk length and bears one or more stinging spines on the upper surface. The spines average 50 mm (2.0 in) long in males and 66 mm (2.6 in) in females, and have a central groove and 29–45 lateral serrations. Replacement spines grow in front of the primary spine. There is a deep fin fold running beneath the tail from the level of the spine almost to the tip. The skin is mostly smooth, save for small dermal denticles found along the middle of the back from the spiracles to the tail spine, as well as three thorns on the “shoulders”. The coloration is dark gray to brown to olive above, with various darker mottling, and off-white below. This species typically grows up to 1 m (3.3 ft) across and 1.5 m (4.9 ft) long, though it has been reported to a length of 2.5 m (8.2 ft). It can weigh as much as 150 kg (330 lb).

Little is known of the natural history of the round fantail stingray. A predator of bottom-dwelling crustaceans and fishes, during the day this species can often be found partially buried in sediment, under ledges, or lying in the open spaces between reefs. Known parasites of the round fantail stingray include the monogeneans Dendromonocotyle taeniurae and Neoentobdella apiocolpos, which infest the skin, and Heterocotyle forcifera, H. mokhtarae, and H. striata, which infest the gills, and the tapeworm Rhinebothrium monodi, which infests the spiral valve intestine, It has been observed being attended to by the cleaner shrimp Hippolysmata grabhami. Like other stingrays, this species is aplacental viviparous.

Here are some interesting facts about angel sharks: Adult angel sharks are usually 5 feet long but some species, like the Japanese Angel Shark can grow up to 6.5 feet. An average angel shark weighs around 77 pounds. In the wild, angel sharks can live between 25 and 35 years old.

If you follow our facebook profile then you’ve probably seen our Fabio in a number of our posts already, he's started his scuba diving internships, Gran Canaria. He’s one of our newest Divemaster recruits and we thought it was time for you guys to get to know him a little better.

Over the years Blue Water Diving has spotted and seen many different varieties of Nudibranchs, so we decide to write this short blog about a few nudibranch facts.‍ Nudibranchs are a group of sea slugs that have magnificent bright colors and are known around the world for that. There are really few restrictions to what colour these creatures can have. Mostly they are natives to more tropical waters but actually, 178 species have been described in Scandinavian waters.